The man behind the site

As an instructor for the Danish kayakunion DKF, I travel a lot in the danish padlerworld and exchange experiences with a lot of padlers.

Through the DKF system of "Superinstructors" I´m helding courses in many Danish Paddlingclubs. The subjects are often "Wingpaddle" and "How to plan courses for beginners".

After finishing my education as a engineer in 1984, i moved to the Danish Lake Distrect around Silkeborg. Living next to the river "Gudenå" and all the lakes, I started my paddler career. Two years later I moved 20 km upstream, and joined the local club - "Ry Roklub". It was a rowing club, but in 1991 we introduced kayaks, and since then I have been the locomotive in getting the kayak department running. In the year 2005 the department is counting 151 active paddlers. 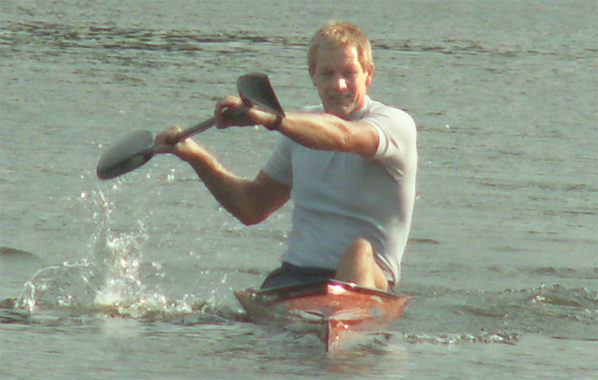 My name is Per Hallum, I´m from Denmark.

The history of the Paddlemeasure

Some years ago our club bought 12 wingpaddles. It was my job assembling them. Back them I used epoxy for it. I assembled them and ajusted the feathering in "the good" old-fashioned way, as well as I could - I was convinced that all the paddles had the same feathering

I claimed stubbornly that they all had the same feathering - and decided to construct an instrument that could confirm it.
I succeeded in constructing the Paddlemeasure - and I painfully had to admit, that the 12 paddles did not have the same feathering!!!!!!!

However the storry did have a happy ending - I cut through the handle on the middle, and placed a 20 cm junction inside. With the help of the Paddlemeasure it was easy to adjust the feathering to be exactly alike.

More paddlers called on me to develop the Paddlemeasure in a way that would give other padlingclubs the same possibilites, and so i did..........

I have a preference for Struer Kajak A/S - here I´m enjoying my X-Lancer from 2004.